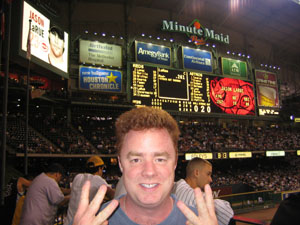 I’m a baseball fan. It’s hard not to be if you, like me, were a boy growing up in Cincinnati in the 1970s. One of the great perks of touring the country doing stand-up for so many years was that I was able to see Major League games in a slew of ballparks.

I have seen games in 31 of ’em. Since there are 30 teams, you are correct to surmise that I have seen a few games in stadiums that are no longer around.

I got booked to do stand-up at a corporate function in Dallas on September 1st. I checked the Rangers schedule in hope that they’re playing in nearby Arlington. Well, they were winding up a ten game homestand today at 1pm. Despite the prospect of hot ‘n sweaty 1pm August afternoon in Texas, I had to fly in early to collect another park.

Then I checked to see if Houston was playing at home. They were the same day at 7pm against my Reds! This sounds so crazy, it just might work.

I flew out of Burbank at 7am, landed in Dallas at noon. Got to my 32nd park, Ameriquest Field in Arlington, in time for the National Anthem. Watched six innings of their loss to the ChiSox. Back to DFW airport. I caught a flight to Houston. Checked in at my hotel and showered up. Off to Minute Maid Park. Watched my Reds get shutout 10-zip. I rather liked the park. My 33rd park (see photo). Then back to my hotel where most of the cars had Louisiana license plates thanks to Hurricane Katrina.

Since they started building all these new baseball parks, I have to return to several cities where I had previously checked their stadiums off my list. I now need 9 more parks: Atlanta (new), Detroit (new), Florida, Milwaukee (new), Philadelphia (new), Pittsburgh (new), Seattle (new), Toronto & Washington.