For years commercials have graced our television airwaves. And thank goodness! If not for those li’l beauts, instead of 23 minutes, we’d have to suffer endure a full half-hour of “Charles In Charge”. 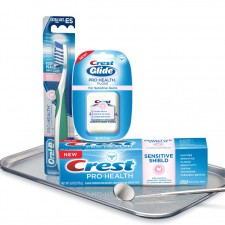 Some commercials are inventive, but the balance really blow. My question: How much longer are we viewers expected to “play along” with the split-screen spot?

Ah, the split-screen genre! A concept that bought some ad-man a beach house in Malibu and a ranch in Montana. BRILLIANT!!!

Now it’s our turn to play along: “Gee, I don’t know what’s gonna happen here…Boy, I’m on the edge of my seat…OH MY GOSH, little Billy jumped over to Family B’s table and snagged a drumstick! Hmmm. I sure didn’t see that coming. This commercial gets better each and every decade it’s on.”

What’s worse is that Family B doesn’t even notice anything unusual. I guess chicken thieves beaming up from the 5th Dimension is an everyday occurance for these people. Maybe that’s what eating poultry marinated in 10W30 does to one’s reasoning.

I know that there are two-family homes. I always thought that was by floor. Not down the middle, 50-50, with a piece of tape like the Brady Boys did when Greg needed “space”.

Procter & Gamble’s Crest toothpaste uses the “kid testimonial” approach which I so dearly love. In one spot a little girl comes on, “My two best friends are the dentist and Crest.” Boy can you imagine the fun at her slumber parties! “OK, who’s turn is it to get their molars drilled?” “Me! Me!”

Thank goodness there’s the “Truth In Advertising” requirement. Since Huggies diapers contends their “new hourglass design fits comfortably,” it stands to reason that at one time there were a bunch of middle-aged workers in Reasearch & Development walking around in plastic undies. There but for the grace of God go I.

The latest trend has gone unnoticed by most. It’s what I call the “Suicidal Spokesman”. This style is so powerful that it has even effected the views of environmentalists. People complain about dolphin getting caught in fishnets. But they don’t get upset about the tuna fish getting caught in the nets. That’s because for years we thought the fish wanted to die. Because we see Charlie the StarKist tuna begging to be killed each and every commercial we see him on. This is a fish that does not know his plight! Hey Charlie, that pamphlet you have “To Serve Tuna”–IT’S A COOKBOOK!! (cue “Twilight Zone” music).

There’s plenty of Kavorkian Communicators. How about the kernels from Pop Secret who oil themselves up in hope of spontaneously combusting into a big old piece of popcorn. Or Kool-Aid smashing into brick walls like a crash-dummy sans auto. And what about the 5th Avenue candy bar peanut who types a letter to the company–a peanut that can type–asking to be smothered in chocolate and fed to small children! The list goes on.

I’m too upset to think of an ending for this article. Just pretend I said something funny…laugh…and I’ll see you next issue.

Besides staying crunchy, even in milk, and being smarter than the average bear, Chip is a nationally touring stand-up comedian based in Cincinnati.