I recently attended the 15 year reunion of my eighth grade Guardian Angels class. That’s right–GA. The school with one of the most feared mascot names in all of sport, “Angels”. Some of our opponents mocked our name saying it was wimpy. Au contraire. I always thought of our mascot as a dead guy who still plays a mean harp. That’s tough! 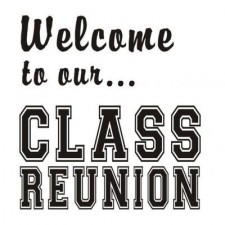 The gathering took place in the cafeteria. Let me just say that the name tags helped tremendously! No telling how many “There he is…” and “Hey Champ” ‘s would have been bandied about, while I rifled through the mug shots of my mind.

Although I haven’t set foot in the joint since ’78, I quickly realized some things never change. There was still a piece of chewed gum bathing in the Halsey-Taylor water fountain drain. There was smoking in the boys’ room. On the far wall hung that old pencil sharpener–defiant, mocking each and every one of us. You see, that was the one with the uncanny ability to hone a Herald Square No. 2 to a point before the final crank severed off the tip.

Personally, I like nothing more than to have my mind blown. So this evening, I was a happy camper. What am I talking about? All I’m saying is that if there was a “Most Likely To Breast Feed At The 15 Year Reunion” award, it would have been handed out. Yes! One moment I’m replenishing my beverage, the next I see a formerly shy classmate sitting next to the milk cooler, nursing! How apprapo{spelling?}. That had to be the most memorable event (or “mammorable” for you Norm Crosby fans).

My former math teacher was in attendance. Back in ’77, she absconded my handy-dandy mini stapler. This because I was exercising my God-given right to shoot staples at Brian Casey! She acted like she’d forgotten about that incident. As we chatted, all I could think was, “I’m bigger than she is now, and if she’s not packing a certain aforementioned piece of kiddie office supplies, we may have to take it outside.”

So did I have any great revelations during the evening? In the words of the great Ricky Ricardo, “I’ve got some ‘splaining to do.”

At the time of this reunion, I had been touring the country 50 weeks a year as a stand-up comedian. This had been my nomadic way of life since Ronald Reagan was President. Because of this situation, when in town, I lived at home. Because my parents were living there before me, you might say that I live with them. There I said it, I LIVE WITH MY PARENTS (although I prefer to say that I live with an older couple). As I heard my classmates talk of marriage, children, and being homeowners, it dawned on me. I realized that I was the only one in the room who still slept in the same bed he slept in while attending the school.

Well, gotta go cut the lawn before Dad gets home.

Besides having minty fresh breath and minty fresh money, Chip Chinery is a nationally touring stand-up comedian originally from Cincinnati who, since writing this, is living on his own in Los Angeles.