So I was working a club in Ventura, California this past weekend. Being a number cruncher, I knew that this particular show would be a personal milestone. As it turns out, this was #1,900 in my career. But that would not be the most memorable part of the evening.

Before the show, the club manager mentioned that there was a young talent, “JW”, who wanted to do some time, and asked if that was all right with me. “Certainly,” I responded. Afterall, I was once in his shoes almost two thousand shows ago. I knew how hard it was starting out, working in front of an audience, and getting known. “Go get ’em”, I cheered.

And now, with apologies to Paul Harvey, the rest of the story.

JW was a very unassuming chap. Turns out this night was a personal milestone for him as well. His divorce was final today. His wife had left him in a l’il financial trouble–a good start for any aspiring “starving artist”. JW was looking for some quick cash. 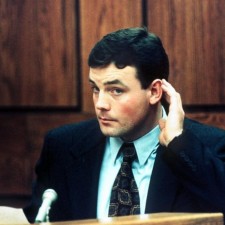 Most entertainers pay their dues and hope to become famous for doing what they like to do. Then, hopefully fortune follows fame. JW knows it’s not easy to become famous, because he already is. As a matter of fact, he already has more national exposure than almost all of my collegues. Dare I say, he’s a household name. You know JW better as John Wayne Bobbitt.

That’s right. Mr. Bobbitt has decided to parlay his “amputee” fame into a potentially lucrative career as a stand-up comic. Yes, now you can die in piece because you’ve heard it all! He plans to go out in the Fall with his “John Wayne Bobbitt-Sleep On Your Stomach” tour. Now I think I know what the guys in Double A felt like when Michael Jordan stepped on their turf. But at least Jordan absolutely conquered a related profession. Don’t get me wrong, I wish Mr. Bobbitt well. Lord knows he’s paid I higher price for fame than I ever hope to.

FAME. It always amazes me what elicits recognition in this country. Afterall, what grabbed headlines then rocketted Marla Maples, Anita Hill, Gennifer Flowers, Joey Buttafuco and even Jerry Springer to fame, hmmm???

Personally, it is my opinion that Mr. Bobbitt is about to receive an invitation to the “Where Are They Now?” Ball. I think he’ll escort Donna Rice. “No Excuses” jeans optional.

What do I predict for John Wayne Bobbitt? I think that on Warhol’s Watch the big hand is almost on the 3.

Besides having been Charo’s love-slave from 1982-1987, and never having had a joke written about him, Chip Chinery is a nationally touring stand-up comedian originally from Cincinnati, now living in Los Angeles.