In case you were wondering, I am working this week in Chicago. That’s right, Chicago-the only city in the US with enough GUTS to share the first three letters of it’s name with mine. Oh sure, there’s Chicopee, Massachusetts; Chickaloon, Alabama; and Chiawuli Tak, Arizona. But since we Americans have been labelled geographically-illiterate, I didn’t think you’d mind my poetic license.

Granted, LA’s my lady. But after Cincinnati, The Second City’s my second city. I digress. 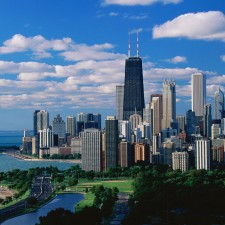 I love Chicago. I actually took up residence here for two months last summer when The Bulls won their third straight NBA title. Maybe you heard about this. This is what Michael Jordan did before his baseball career.

I remember when the final game ended, I was looking out the 8th floor window of my “summer home” onto the corner of State and Division Streets, the epicenter of the celebration. I was very excited! Not only because I was in the midst of a city jubilant over an athletic accomplishment. But also because, I was in the market for a VCR and luting was in the offing.

I bring this up because when I went down to the street to jump on the Bulls bandwagon (which I have done every year at playoff time since 1991, thank you), I struck up a conversation with some revelers, Dr. and Mrs. Merkel and family.

The Dr. & Mrs. Merkel Family live at 1060 West Addison Street. Nice folks except, that one of their kids corrected me when I called their dad “Mister”. That made me wonder just WHY we address doctors by their profession. What if we all did that? “Doctor Merkel please meet Comedian Chinery. Banker Johnson, have you met Plumber Shannon?”. It could make it easier to know who to avoid: “Housewife Landon, I’d like for you to meet Amway Salesman Flanigan.” Oh geez!

Maybe doctors want to remind us that they spent a huge stack ‘o money going to medical school for years. To them the word “doctor” is short-hand for “I was broke and didn’t get to have any fun in my 20’s”.

Maybe it’s because often times a doctor’s life IS being a doctor. That certainly seems to be the case with this guy. I guess Dr. Merkel figures your current role in life defines who you are. Being introduced to his family was like talking to George Jetson, “This is my boy-Elroy, daughter-Judy, Jane-my wife”.

I say leave the 9 to 5 behind. Why be pretentious? Heck, surgeons in London go by “Mister”. Thankfully, there is a group of doctors that don’t wave their scholastic achievement in your face, and for good reason-The Ph.D. It avoids a lot of explaining.

“So, you’re a doctor. What’s your specialty?”
“Western Civ.”

When he’s not wondering what it would be like to eat dinner with Dr. Heimlich, Chip is a nationally touring stand-up comedian originally from Cincinnati, now living in Los Angeles.