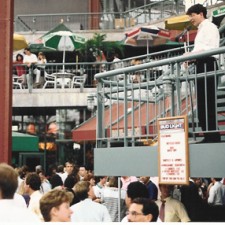 I wanted to take a moment to apologize to my family, friends, colleagues and tourists everywhere for what happened in St. Louis. No, I didn’t close my show with my impression of Jack Nicholson rapping a McNuggets joke while juggling flaming scarves to some upbeat funky music. Which isn’t very easy, come to think of it, because one hand has to be pulling back your hairline.

Rather, I went up to the top of the Gateway Arch with Jim. Sure, that may sound innocent enough, but I got a wild hair. Once in the small viewing room at the apex, I started running from side to side, bouncing off the walls, trying to rock The Arch. It began to sway, and after what seemed like an eternity, this 630 foot monument crashed into the Mississippi River.

There was wailing and gnashing of teeth, invocations, and oddly enough Shelly Winters fell through the window. Go figure!

As you may recall, this new club is having a bit of trouble filling the seats – even with us handing out free passes in the mall. The powers that be had another brainstorm: Why not have the comedians do a brief teaser in front of a happy hour crowd at a bar in the mall? Hey, that’s a great idea, except that the patrons didn’t agree. What they thought was: It’s Friday, I’m in my suit, in 95 percent humidity, trying to relax with a beer and some pleasant conversation – Who are these jerks with their cute little observations!?

I immediately realized how disgruntle they were – so I scrapped my prepared text and sang a medley to soothe the savage beasts. It was my own arrangement of “Billy, Don’t Be Hero”, “The Night Chicago Died”, and “Kung Foo Fighting” – a cappella, of course. Jim was spared this agony, but Ric, our headliner, wasn’t. He went on for about as long as a Mike Tyson bout. They really didn’t want to listen to, Ric. Maybe I should’ve done something from “Les Mis”. Oh well, there’s always next time.

The publicity stunt at the Arch must’ve paid off because the late show Saturday turned out to be a full house of 150 or so. Thus, the Tour of the Breadbasket ’89 ended on a good note. Jim and I drove back to the Queen City right after the show – still friends.

This 27-day trip accomplished what we bad hoped it would. First of all, we got paid for four weeks work, and saved a little on gas by car-pooling it for the 3,300 miles. We had hoped to convince two new booking agents that Cincinnati breeds funny comedians, ourselves included. Jim and I have already been booked back, on separate tours, to feature on the Lincoln, Omaha and Des Moines runs next spring. The owner of the Kansas City club also has expressed interest in having us return.

Besides adding a few new chapters to our memoirs, we have added a few new minutes to our routines. Jim has come up with bits on the Soviet’s Space Shuttle being identical to ours, and the case currently in the courts about custody of invetro-fertilized embryos. Jim’s subject matter tends to be current events. Mine, on the other hand, leans toward the stuff we all experience but rarely think about. I was able to work out bits about the four commonwealths in this country who aren’t quite ready to commit to statehood, and the absurdity of “The 3 R’s” – Reading, Writing and Arithmetic.

I hope you’ve enjoyed these articles and clamor for more. So for Jim Villanucci, myself, and the whole Hee Haw gang – see you in the funny papers!

Stand-up comedian Chip Chinery is a native of Anderson Township.