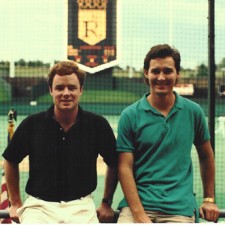 I would like to start off by thanking McNicholas High School alum, Pat Tabler, and the Kansas City Royals for giving us free tickets to their game on our off day, Monday. I just called them up, told them who we were and immediately the red carpet snuck under our toes. Tabby–that’s what I call him now because we’re so tight–even threw an Angel out at the plate from right field! Thanks again folks.

Day 22 brought us back east to The Gateway to the West-St. Louis. We’re playing another Stanford’s Comedy House to tens of people each and every night. This club is going through what our headliner, Ric Schrader, calls a “shakedown cruise”. To remedy the small crowds, we have been sent out into the adjoining mall area to hand out free passes. We don’t mind because we hear Sinatra does the same thing when he’s in town. The only problem with this is that people feel they get what they pay for. The fact that we are the ones handing out the passes might send the message, “we suck-come judge us”. So they sit down in their black robes and powdered wigs, and do just that. All things considered, the shows are going well.

Ric is originally from Seattle but moved to San Francisco where he honed his skills to become The Funniest Man in Knoxville. As for Jim, the lovesick, road-weary comic, we’ve had to take his belt and shoelaces from him nightly so that he doesn’t hang himself. I don’t know why he’s bummed. Jim won the coin toss and gets his own bedroom. Me? I’m in my sleeping bag on the floor of the living room/common area. But instead of subscribing to “the glass is half empty” way of thinking; I like to think that mine is the only room with a TV and sofa set!