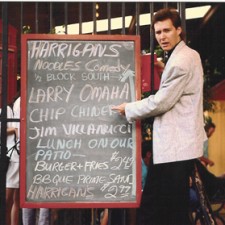 Jim in front of the Noodles “marquee”

Day 3: After living with Jim Villanucci for 2 days, I have realized one thing – he eats faster than I do. I didn’t think it was possible for mere mortals, but he’ll finish a full pancake ahead, everytime. That just gives him more time to whine to a captive audience! You see Jim has been doing comedy full-time for 13 months and is clearly burned-out. I hope he snaps out of it, or it’ll be a long four weeks. Heck, he’s even contemplating a day job. That topic dotted our two hour drive from Norfolk to Omaha.

This “weekend room” is going through an identity crisis. They keep moving the location of the comedy to a different place in the complex. So Harrigan’s, formerly Noodles, formerly The Old Market Comedy Store is where you’ll find us.

I went for a walk while the headliner was on stage. When I returned, I was told someone was here to see me. Just another Chip-Head seeking another autograph I surmised. But it was Rob Heglin, a friend of mine who used to live in Turpin, who was out here on business. I always said I was a draw.

Day 4: 105 degrees and we still went running. Once back, we stopped by Regal 8’s lovely uncirculating indoor pool. Someone in the pool looked familiar to Jim. It was Elvis! No, it was Roy Criss, a comic Jim had worked with in Windsor, Canada.

Day 5: Jim and I wrote all day, tightening up our old bits and playing around with new ones. Two shows again this evening.

Day 7: After running, Jim and I spent about an hour or so calling booking agents about work. The way the comedy “circuit” works these days is that the booking agents represent the clubs.

We did get in touch with the booking agent who put together this week’s “Des Moines run”. And it’s a good thing – we thought we were supposed to be in Des Moines on Wednesday, but we found out that the Des Moines run stops in Iowa City that day.

Day 9: Back to Iowa City to play at the Plum Creek Lounge. More Chip-Heads show up. The sound system was so horrible that one of the comics did his high-energy show sans microphone. This would fit into the “hell-gig” category. Hey, that’s showbiz!

Until next time, see you later.