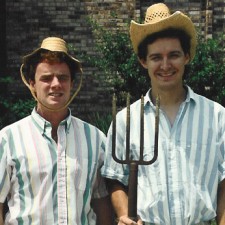 An Anderson Gothic? Chip Chinery and Jim Villanucci as seen before leaving the comforts of Anderson Township for that hot-bed of comedy, Nebraska.

My name is Chip Chinery: comedian, former Forest-Hills Journal-Press paperboy, and now guest columnist. In the tradition of such great correspondents as Ernie Pyle and Charles Kuralt, yours truly will be sending back weekly reports of life on the road as a stand-up comic.

I will be accompanied on this road trip by my Anderson Township colleague, Jim Villanucci, as we tour the “Breadbasket”. Where, you say? Norfolk and Omaha, Nebraska; Clinton and Des Moines, Iowa; Kansas City, and St. Louis. All told, we will be performing 30 shows in 27 days – Let’s see the Stones do that!

Right about now, I’m betting that two questions have come to mind. Number One: “Hey, Mr. Big Shot Comedian, if you guys are so funny, then why do you have to drive 850 miles to Norfolk? Well, because we’re BIG there. Actually, it is a great opportunity to get “in” with two different comedy club chains. The money is good, and we’ll be able to see if it’s true what they say about Midwest farmers daughters. The latter reason should answer your other question about me and Jim.

Steady, steady – Were not showbiz slime-balls, either. We’re the 1989 version of Hope & Crosby! Our roadshow will let you in on the creative process of developing, new material, the personalities we meet and how we fill up the other 23 hours of our day.

See ya next week.

Stand-up comic and Anderson Township native Chip Chinery will be keeping us posted with weekly reports on his, whirl-wind tour of America’s heartland.