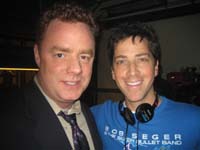 My agent called me the other day confirming that I would be working today for Dan. I had no idea what he was talking about. Turns out that unbeknownst to me, Dan Bucatinsky called my agent and offered me a part on his new CBS pilot “The Commuters”. I used to do sketch comedy at The Acme Comedy Theatre with the creator/writer Dan. Dan also hired me last year to be in “The Aisha Tyler Pilot”.

My role was that of a poker player in the back room of a bodega in New York City. I beat David Arquette out of all his money and a diamond bracelet to boot! We’ll find out whether or not CBS gives it the green-light in mid-May.