As a little kid I remember wishing that I could eat everyday at McDonalds (I’m sorry, RocDonalds). I thought that’d be great. I loved that place! I didn’t even mind that the mayor had a cheeseburger for a head. What no one told me, was that there was a saying floating around, “Be careful what you wish for–you might just get it”. 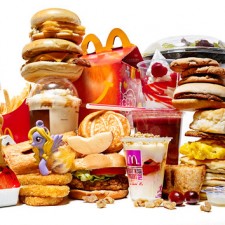 Now that I’m a “journalist” and world famous comedian (on par with Rula Lenska), I dine at the golden arches more than any man should. This is a childhood dream that I should have waken up from years ago. But since I’m somewhat of an expert on their operation, let me tell you what’s new at “my kitchen”.

As you know, we are living in a very health conscious time. McDonalds is not running away from this. They post their menu’s nutritional information on the wall. Personally, I believe they think of this as a hand in a game of poker. They think customers will assume “the stuff must be OK or they wouldn’t post it, right?”. But I read it and they’re bluffing.

They have an amazing product: the “shake”. Notice I did not say “milkshake”. There are no dairy products in this creation. It’s sugar-water and spackle.

I am confused about their drink lids. There are several bubbles on the lids that, when depressed, denote which drink is in the cup. Next to those descriptions is braille lettering. Since they are a smart operation and wouldn’t do anything without a reason, I figure that either McDonalds is hiring the blind to man the fountain dispenser, or that there has been a rash of practical jokes played upon the visually disadvantaged by their “friends”. “Gross, I wanted regular Coke!”

They have decided to replace the tasty shredded cheese that tops their salads with carrot shavings. Don’t get me wrong, they’re both edible, but hardly interchangable. I guess they didn’t want to shell out McCash on new McPhotos. I can hear the meeting now, “We need to lower the caloric and fat count on our salads without a major expenditure. Hey, carrots look like cheese!” I hope this way of thinking doesn’t creep into their other cuisine. I can see it now. “Mmm, carrot burgers.”

Besides believing that the second Schottzie came from a grassy knoll, Chip Chinery is a nationally touring stand-up comedian originally from Cincinnati, now living in Los Angeles.