must apologize for not having written in the past few weeks. But then again, I haven’t heard a lick from you folks either! Our relationship seems soooo once-sided. Anyway…I’ve been quite busy with the business of show. Or for those of you not comfortable with the use of prepositional phrases as adjectives, show business. Quite frankly, I didn’t take a vacation this summer. When you spend half the year traveling, a vacation is not going anywhere.

I did have the occasion to work in Memphis and visit Michael Jackson’s father-in-law’s place. Let me just say that when it came to interior decorating, Elvis was a fantastic singer. The family room looked like the inside of a customized van. There was fake fur and swiveling captain’s chairs. I was surprised the back wall didn’t have a unicorn romping across a sand dune.

Three weeks in Phoenix and Provo made up my “Dehydration Tour ’94”. I also visited the biggest tourist-trap rip-off in this great land of ours: South Dakota’s monument to Crazy Horse. If you think you want to go there, save your gas money. First of all, it’s not anywhere near completion. They have been carving it since the mid ’40s. Like neighboring Mt. Rushmore, it will be chised out of a mountainside. It will (someday) reveal the Indian, I’m sorry Native American, Crazy Horse on a horse. So far, you can make out where his nose and brow will be–and that’s if you squint! To help you better envison it, they defaced the mountain with white paint by outlining the most rudimentary horse’s head with a dot for an eye. Then they wanted to charge $6 for a gander at this majestic tribute.

If I wasn’t doing stand-up on the road, I spent my summer vacation “at home” in Los Angeles going on auditions. If you think commercials are dumb, just come to an audition with me. Just like USA For Africa did when they sang “We Are The World”, you have to check your ego at the door. Some of the innane things I did this summer included improvising as a square dance caller, being a singing chef (in 4-part harmony), and doing cartwheels as an Arkansas Lottery winner. And I have a degree!

I went out on an audition for the host a new, funny afternoon talk show that Disney is producing for syndication. My first audition was with a woman who was Star Search’s 1990 spokesmodel winner. The producers informed me that in our 2 minute audition, she touched me 23 times. Cool! I went on a call-back audition for the same part and had a brush with greatness. I read with Bridget Gless. Her sister was either Cagney or Lacey, or Kate or Allie. The idea of this show is to give an alternative to what David Letterman calls “shows devoted to social mutants”.

Time will tell if I get it, although odds are I won’t. You are considered successful if you land one job out of every 20 auditions here. If I do get it, I can see the headline of a future EastSide cover story: “Let’s Talk!”. The accompanying photo has me and Jerry Springer standing next to each other like boxers, microphones in hand, mugging for the camera. 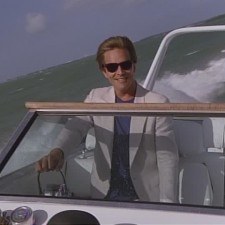 A picture of Sonny Crockett driving a boat. Ray-Ban Wayfarers, an Armani jacket, a plain black T-shirt, and a Wellcraft Scarab 38 KV was all that Sonny

(Much needed info for this tag: Sonny Crockett was Don Johnson’s character on “Miami Vice”. He lived on a boat.) Besides working on his thesis “Sonny Crockett & Quincy, M.D.–Detectives or Men Of The Sea?”, Chip Chinery is a nationally touring stand-up comedian originally from Cincinnati, now living in Los Angeles.