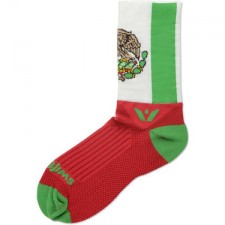 Over the holidays I met a woman who is fluent in 5 languages. FIVE languages! That’s pretty impressive from where I sit. Especially since I’m only an expert with two–The King’s English (self-taught) and Latin (“pig” variety).

I took French in high school AND college. I figured if you are going to be mediocre at something, why not have it count for college credit. I toiled for a total of 5 years and all I have retained is that their word for “eight” is pronounced like our word “wheat”. A trans-lingual homonym! That will come in handy since we are now in a one-world economy.

So what’s my point? I’m glad I asked. The sea has parted. The sky has opened up and enlightenment is mine. One word: socks.

That’s right, socks. I was listening to the radio when a commercial came on about learning to speak Spanish. Now I know why all my friends took this language–it’s EASY. According to this ad, if you can spell in English–you can speak Spanish.

The commercial consists of a man asking a woman about her clothes.

Now before all you ney-sayers chime in with “Chip, that’s not true! It doesn’t work!! That program s-U-c-k-s!!!”, I must let you know that I was once sceptical as well. I didn’t think it would work, but it does. The key is to wear enough clothing to answer any question posed to you.

For example:
“What’s that on your hands?”
“Gloves. G-L-O-V-E-S.”
“That means “I want a peanut butter and jelly sandwich.”

“What’s that holding up your pants?”
“Belt. B-E-L-T.”
“That means “I’m being stalked by a one-legged Elvis impersonation!”

Using this patented technique, I have now added Spanish to the list of languages I have mastered. French is hard–Spanish is cinchy! I suggest you take this course, too, unless you suffer from dyslexia. Whereas U-N-D-I-E-S means “which way to the bus depot”, N-U-D-I-E-S means “play my teeth like a xylophone with a ballpeen hammer!” Caveat emptor.

Besides driving a spiffy car and being a personal friend of Peter Tork’s, Chip is a nationally touring stand-up comedian based in Cincinnati.