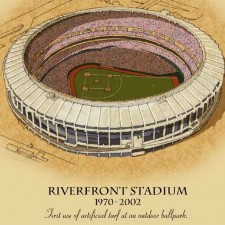 Heck yeah, you may recall my monster year back in ’74 for Mt. Washington Cleaners. It was in all the papers. As a nine year old I hit .684. I figure if I come back and do only half as good, I’ll be making a lot of cash. So right now I’m trying to get down to my playing weight: 85 pounds. But maybe sporting a gut doesn’t matter. Kevin Mitchell does great and we haven’t seen a guy that big running around Cincinnati since William Howard Taft.

Regrettably, I missed the season opener this year. I couldn’t believe it. I had to work! I thought I was safe being a Catholic Reds fan. Afterall it was Easter Sunday and Opening Day. But the club in Dayton said the show must go on. HEATHENS!

I’m looking forward to this season, although I’m keeping a watchful eye out for Roberto Kelley. As you may recall, last year he went in to a slump. To snap out of it, he changed his name to “Bobby”. I just heard that he was not happy with his progress and has decided to further Americanize his name. From now on, he wants to be known as “Judy Garland”. And we thought Pedro Borbon was weird.

Now, my two-cents worth on the ongoing stadium controversy. Keep in mind that when it comes to football, I feel the best seat in the house, is in a house. Don’t get me wrong, I’ve been to a couple games in The Jungle. But what makes no sense to me is the large number of fans who are constantly looking at their portable televisions or the scoreboard! What are they thinking? “Now I can watch a televised game in the comfort of a freezing stadium.” ?

But baseball’s different. I’ve seen games in 20 major league parks. Although I prefer a grass field, Riverfront is fine. The Jumbotron is a nice addition to a baseball game. It’s so much better than the scoreboard we had a few years ago. That thing was like a gigantic Lite-Brite. You just know that the guys running it had to have said, “Where’s the pattern for Johnny Bench? There it is, next to the sailboat!”

Well, gotta get ready for the big comeback. If I have any shot whatsoever, I figure I have to become an NBA superstar, or lose 90 pounds. Either way, I’ve got to run.

Besides preferring plastic over paper for bagging groceries, and just the opposite to pay for them, Chip is a nationally touring stand-up comedian originally from Cincinnati, now living in Los Angeles.