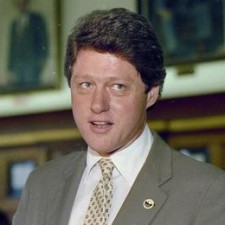 I’m not a “political animal”. Maybe that’s why I find myself blown away by the process we have for electing our President. We have “government by the people, for the people”. So by definition, politicians aren’t any different than you and me. Basically, these are people who have a job–but want a better one. In George Bush’s case–a four year extension on his current contract.

But you and I could never pursue a new job the way a presidential candidate does. What do they do? They tell their current employer (us), “Yeah, I’m applying for a different job, I’m going to pursue it on company time, and I want you to keep paying me while I’m gone. Is that OK? Oh yeah, that’d fly!

Since it’s “government by the people”, we must be the coolest bosses ever! Can you imagine us trying to get away with that at our jobs? We’d be allowed all the time we wanted, and we’d spend it in the unemployment line!

What happened in Arkansas when Bill Clinton was out campaigning? Did they send out for a temp service? I can just picture a woman coming home from work and her husband saying, “Whatcha do today, honey?”
“I was Governor.”
“Again? They’re gonna give you that job!”

We all knew about Bush, Clinton, and Perot. But I was amazed at how many other parties had candidates. Andre Marrou ran on the Librarian Party ticket. Did I read that right? I imagine their convention being a bunch of old ladies running around going, “Shhh. Shhhh!” And what was Lyndon LaRouche’s affiliation? Oh that’s right. He’s in the “Elect-me-so-I-can-pardon-myself-and-get-the-hell-out-of-jail” party.

What kind of person wants to be President anyway? Once in charge, you get blamed for things like the economy. Let’s face it, the people running for President aren’t exactly financial wizards. They spend 40 million dollars campaigning for a job that pays $200,000 a year! I have a feeling math is not their best subject. I bet any one of them would fall for that “do you have two 10’s for a 5?” trick.

$40 million! And we wrestle with the dilemna of whether or not to pay 15 bucks to have our resume typeset.

I’d like to see them go in search of their prospective new job the way we would. The honorable way, the American way–during lunch hour behind the boss’ back.

Besides having a great personality and being a snappy dresser, Chip is a nationally touring stand-up comedian based in Cincinnati.