On January 4th, I opened up the west coast offices of “The Chip Chinery Organization” in Los Angeles. I had hoped to become a mover and shaker out here, but quite frankly this was not in the brochure.

I feel somewhat responsible and have chosen this forum to come clean. See, I bought one of those fancy-shmancy, novelty clock radios when I moved here. On the night of the 16th I was playing around. Instead of setting it on “radio” or “alarm”, I selected “earthquake”. Like I said, I thought it was a gag. I’m sorry. Please don’t tell State Farm. 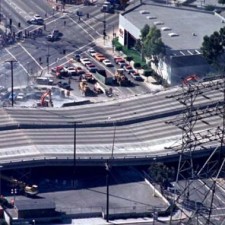 To me that’s the most interesting occurrence about the January 17th earthquake: Everyone and Everything in the greater Los Angeles area, woke up within 5 seconds of each other. From shut-eyed to bug-eyed in split seconds. The words, “When did you get up?” were not uttered on this day.

My thought process was simple. As I lay in bed being shaken back and forth, I heard loud rumbling, and my closet doors rattling. In a split second I surmised, “Oh, it’s a train outside. Wait a minute, trains don’t run by here. It must be an earthquake.” Then I rationalized, “It can’t be an earthquake, I’ve only been here a couple weeks.” As if that had any bearing on the situation. Like I had some sort of 30-day-satisfaction-guaranteed-or-your-money-back agreement on life out here.

Now the hard part, trying to remember which Public Service Announcement applies to this situation. It was ridiculous. The room was shaking and I was thinking “Drop and Roll–no, that’s fires. Boil Water–no, that’s delivering a baby in a farmhouse. Oh yeah, Stand In A Doorway. BINGO!”

Recently, I was able to see all the damage. I couldn’t help but wonder if there was anything else I could’ve done. Then I realized that maybe all of the quake’s destruction could have been avoided had I voted for Quisp. Once again, I blame myself.

Life is getting back to normal, as normal as LA can be. Out here normalcy is graded on a curve. Recently, I was approached by an agent who was interested in handling me. During what became our final conversation, he asked me if I smoked pot. “No,” I replied. Then he said, “Do you know where I can get some?” Oh great! This guys not even connected enough to find weed, how’s he going to get me a TV show?! Showbiz.

Besides being fluent in English and a master of the automatic transmission, Chip Chinery is a nationally touring stand-up comedian originally from Cincinnati, now living in Los Angeles.