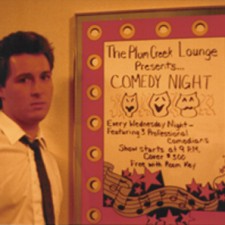 After speaking with my editor, Beryl, “Don’t call me Gopher” Love, I have realized that last week’s column wasn’t all that chipper. He even contemplated a “Groucho” nose and on my picture! Since last week wasn’t all beans and skittles, I didn’t want to sugar-coat it for all the Jim and Chip disciples out there. That, my friends, was the typical downside of “the road.”

Things are already looking up. Last night we saved a few bucks by dining at the hotel’s free buffett and on Day 10 it’s my birthday – the big 25. Somehow, it wasn’t mentioned by E.T. (the television show, not the Spielberg creation). Jim and I drove from Iowa City to Des Moines for a weekend stint at a place called the Spaghetti Works. Beautiful accommodations in a downtown hotel. The city is clean and reminds me a bit of the Queen City. The club is great and is located on what would be our Second Street.

The audience even gets all of our subtleties here, probably we’re in the capital of the state with the highest literacy rate in the country. As far as this town goes, Iowa certainly isn’t an acronym for Idiots Out Wandering Around.

In case you were wondering, Jim and I are co-featuring. That means one show I open for Jim, the next, he for me. This week, Paul Kelly is headlining. He’s 40 years old and a comedy veteran from the Windy City.

Being the Road Warrior that I am, I got up Saturday morning and drove 200 miles to Kansas City to “take my baby on home, yeah, yeah.” No, No. I drove down to the wedding of a comedian friend of mine from Connecticut. Tom Hertz married Susan Kelly – no relation to Paul. Not long after the nuptials, I had to hop back on 1-35 to make our evening shows. And it’s a good thing. After the first show, we met Iowa’s Miss Beef 1987! If I’d have known she was in the audience, I would have done all my Sizzlean jokes. Oh well.

On Monday, we ran our errands, did our laundry and played softball with some actors a comic friend of ours had met. It’s not often that you get enough people without day jobs together on the road, so it was fun. Another Buckeye comic was passing through town. Ted Lyde, from Akron, was in Omaha last I week and was on his way to the Ft. Worth Funny Bone.

Tuesday is our third day off in a row, so we decided to rent a few movies. It’s a great deal! With each new membership you receive a free video and the same goes for each referral membership. So Jim signed up – one free video. He referred me – two more free videos. Then referred Sid, one of the headliners we met – totaling five free videos! Next week, I tell you how to buy real estate with no money down.

Wednesday is a day of mourning. Elvis moved to Kalamazoo 12 years ago today. We pulled ourselves together for this evening’s show at Stanford’s Comedy House. Interestingly enough, one of the owners used to host an NBC-TV program from 1955-1957 called “Top Tune Time”. Herb Taubin is his name, and he treated us really well.

Tonight’s show opened with three Elvis impersonators competing for cash and prizes. They weren’t very good and surprisingly, none of them did anything from his popular “Imperial Bedroom” album. Oh well.