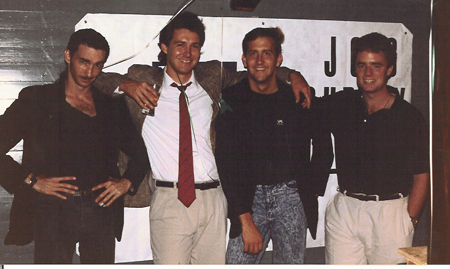 The odyssey of your local comedians, Jim Villanucci and yours truly, couldn’t have started on a more appropriate day. I pulled the chocks from the tires of my Honda on August 1 – August Fools Day, if you will – and headed for Iowa City, Iowa.

You know, the most frequently asked questions are, “Do the clubs pay your mileage?” and “Where do you stay?” The club and the comic agree on a flat rate for the shows he is contracted to do. So you can fly, but Jim and I don’t find that cost effective at this point in out careers.

As far as housing goes, you are put up in a hotel or “comedy condo” for every night you perform. Since we aren’t performing until tomorrow, I arranged to stay at the house of a college buddy of mine from my days at Miami University. Randy Harrison is his name. From the Grand Rapids’ Harrisons (in case you socialites were wondering). He’s in the MBA program at Iowa, and his couch and fouton were ours to use.

The distance to Iowa City was exactly the same as that Indianapolis car race, that takes place Memorial Day weekend. Unfortunately, our time was nowhere near that of ’89 winner, Emerson Fitipaldi. We blame our pit crew. After a beer and a 3 mile run, we set out for REM 3.

After six hours of kip, we packed our li’l diddy bags and drove by corn for eight hours. We followed that long and lonesome highway, east of Omaha. And there really is nothing else to do but listen to the engine moanin’ out its one lone song.

This 400 miles stretch ended in Norfolk, Nebraska the birthplace of one Johnny Carson. Ed McMahon, of course, was born in the much less pivotal town next to Norfolk. Oh, I kill me!

We hit town at 3:10 p.m. and went straight to KNEN 94.7-FM to plug that evening’s show. We went on the air at 3:20 with host Mickey Meyer. I have never met a more nervous DJ in my life. He must have had a bad experience with some of the big-name comics, like ourselves, that have entered into his world.

When that was over, we found the Blue Ridge Motel, our housing for the evening, and slept for a couple hours. “Car-lag” is what Jim, has labeled our malady.

After wakening, we retrieved our messages from our answering machines, as we do often because we’re in showbiz, and you never know when Sammy or Frank need a favor. Then we ran and cleaned up for the show.

With the comedy “boom” many small towns who can’t support a full-time comedy club have opted to have comedy one night a week. Our “one-nighter” took place in a barn, basically, called the Riverside Ballroom. This is the kind of place where as you drive in, you count the pickup trucks with gun racks to get the feel for what’s in store. Am I stereotyping? Yes, but it never fails.

This is the kind of place that prefers four letter words over true adjectives. I’m not complaining, we got paid.

Mike Lewis, the headliner, brought a comedian friend of his with him from his home town of Minneapolis. So we had a comedy bonus in the body of Gomez O’Prey. The show went surprisingly well.

After the show Jim went out for a beer with Mike and Gomez. Me? I had to bang out this story before deadline. No biggie. Tomorrow we head back east, to Omaha, to finish the week. And if you can’t party there, where can you?

Also, I have just come to the realization that the Blue Ridge hasn’t updated its electric. Therefore, its 2:37 a.m. and I’m outside, next to a Pepsi machine, with my Royal Aristocrat Portable typewriter on a 55-gallon trash drum because this thing requires a 3-prong outlet. C’est la vie.

So that’s it from here. We’ll see you next week – same Bat-paper, same Bat-article.